The Big Dig site, between Cumberland and Gloucester Streets in The Rocks, is an area of land containing archaeological remains from the late 18th century, the time of Australia’s first European settlement.

Archaeological excavations began in 1994 and attracted enormous media and public attention. A dedicated team of 20 archaeologists, assisted by over 400 volunteers, worked on what was known as ‘The Big Dig’. It remains one of the largest urban archaeological excavations in Australia. The team uncovered the foundations of over 30 homes and shops, the earliest built in around 1795, and over 750,000 artefacts. The site provides a rare insight into early urban life in Sydney.

The pre-European landscape and the Gadigal people
The Rocks, as its name suggests, is a rocky peninsula jutting out into Sydney Harbour. The area was know as Tallawoladah by the Gadigal people (of the Eora Nation). No remnants of the Gadigals’ presence were found on The Big Dig site, perhaps because the ruggedness of the sandstone would have made it a fairly harsh and exposed area. However, not far up Cumberland Street, a campfire dating to almost 300 years before the arrival of the Europeans was uncovered during the construction of the ANA Hotel (now the Shangri-La Hotel). Among the ashes of the fire were the bones of bream, snapper, oysters and other seafood.

Arrival of the Europeans
The Rocks became home to many of the convicts who arrived in 1788 with the First Fleet. The ridges, known as “the lines”, were named after the lines of tents and huts that housed the new arrivals. These people set about transforming the rugged area by cutting, terracing and draining the landscape. Tracks leading up from Sydney Cove were cut into the rocks, including Cribbs Lane, The Big Dig site’s first lane-way. 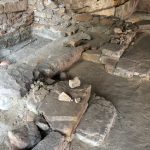 Early residents on The Big Dig site
The names of the earliest European occupants of the area are unknown. In 1795 two convicts, George Legg and Ann Armsden, built a slab hut on the site. George drowned in a boating accident in 1807, and Ann married a local baker, George Talbot, in 1810. Together they rebuilt on the site, constructing a small two room cottage with an addition room behind that had a large fireplace and deep water cistern, so may have been used as a small bakery.

Irish rebel, Richard Byrne, lived on the site from around 1805. Richard was a stonemason and appears to have quarried parts of the site for stone to build the foundations for his weatherboard cottage. It appears many of the earlier houses on the site were constructed from the very same stone they were being built upon. Richard, his convict wife Margaret and their family of seven children lived in this house until the 1850s. Their descendants continue to live in Sydney today. 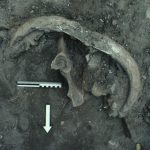 From 1809 to the late 1820s, George Cribb lived on the site, building a handsome two storied Georgian house on the southeast side of Cribbs Lane. George was typical of many early convicts who prospered from the opportunities of the new colony. Though a convict on a 14 year sentence, he ran his own butchering business, slaughtering cattle, sheep and pigs to sell as meat to the colony and to the ships leaving Sydney. As Cribb’s fortune grew, he built a row of four tenements, which he rented out to other convicts and settlers. His slaughterhouse was in the centre of his property and took up the majority of land on the southern end of the site. It was here that he buried the discarded skulls, horns and bones of the slaughtered animals, poisoning his first water well in the process. Around 1818 a number of household items were discarded down his disused water well, including fine hand-painted Chinese porcelain, a sharp butcher’s filleting knife and a small alcohol still. George had been under surveillance on suspicion of dealing in illegally produced alcohol, which was effectively used as currency. He was arrested, but no evidence could be found to convict him – until the archaeologists found his still 180 years later!  By the late 1820s George was in financial difficulties and was declared bankrupt. His property was purchased by land speculators ‘Raine & Ramsay’, who created Carahers Lane and sold the land off in smaller subdivided lots. In 1830 George’s former home was re-developed into a larger building with stables behind, later known as the Whalers Arms Hotel.

Subdivision and Development
Albert John Nicholas bought the land on Cumberland Street front of the site, building five cottages over the former quarry. On Carahers Lane six two storey terraces were built, and by 1850 three more were built on Cribbs Lane. Over the next 70 years, these and other houses on the site were occupied by immigrant families from England, Ireland and from across Europe.

In many of these houses, rubbish was disposed of under the floorboards. It is this rubbish (roughly 40 centimetres deep, built up over 50-80 years) that tells us much about the daily lives of the people that lived on the site. They ate well, serving their food on fine china; beef, lamb, oysters, fish, chicken and duck, and they dressed their salads and vegetables with oils, pickles and chutneys. Their houses were decorated with figurines and vases of flowers and sometimes with cowry shells and colourful coral. They sewed their own clothes, wore fashionable jewelry and smoked clay pipes. Their children played with dolls, miniature tea sets, marbles, toy soldiers, chess and dominoes.

The Byrne family had also sold off their land bit by bit in the 1840s and 50s. At the top of Cribbs Lane, Robert Berry established a bakery in 1844. Families in the neighbourhood often took their Sunday roast dinners to Berry’s Bakery to be cooked in the large ovens. On the other side of the lane, Robert’s sister Jane, and her husband Thomas Share, operated a pub called the Plymouth Inn, later called The Australian. When it was demolished in 1913 a new Australian Hotel was built nearby, and this remains next to The Big Dig site today. 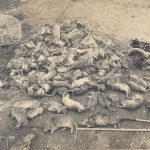 1900 – Bubonic Plague
When bubonic plague arrived in Sydney in 1900, it was thought the densely occupied area of The Rocks would be hit hard. After the 1850s, Sydney was spreading out into the suburbs and many people no longer considered the old parts of the city to be healthy. The Rocks became known as a “slum”. While piped water and sewerage had been connected to the site since the 1850s, negligent landlords had allowed the systems to fall into disrepair. Some of the houses were 70-100 years old and had been poorly maintained. 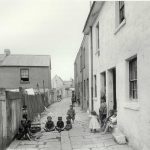 The total number of deaths from plague in NSW was just over a hundred, and of these only three people died in The Rocks. However one of those was a 15 year old boy called James Foy, who lived with his family on The Big Dig site in a terrace on Cribbs Lane. He most likely contracted bubonic plague on the waterfront, where he worked as a paperboy. Large areas of The Rocks were condemned to demolition and, after being bought out by the New South Wales State Government in 1901, the site was gradually cleared. Some people who lived on the site stayed on in The Rocks, whilst other moved out to the suburbs. 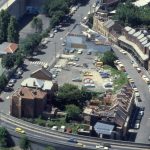 1917-1994
Large scale corrugated iron engineering sheds stood on the site from 1917 to the 1930s, the heavy concrete footings visible around the site. In the 1950s the site was cleared, covered with bitumen and used as a bus depot, and later as a car-park. The bitumen effectively sealed and protected the archaeological remains below, providing an extraordinary opportunity to examine this record of the past when the site was excavated in 1994.

1994 till today
The site was closed to the general public from 1994 to 2009. Further archaeological excavations were undertaken on sections of the site in 2005, 2006 and 2008. In September 2008 construction of Sydney Harbour YHA and The Big Dig Archaeology Education Centre began, with first guests staying at the hostel on the 31st October 2009. The hostel and The Big Dig Archaeology Education Centre were officially opened on the 7th April 2010.

More information
‘Inside The Rocks’ by Grace Karskens provides a detailed account of the history of The Big Dig. Copies can be purchased from the reception desk at Sydney Harbour YHA for $30.00.